As the first Founder of the Month, PUSH presents a very interesting project by two men who didn't let the difficult and nerve-wracking time that Corona catapulted us into stop them. Just three months ago, Marius Thielmann and Jacopo Borrini founded Stuck Magazine. It is a print publication that aims to inspire readers to explore subcultures. Thus, intimate insights about various artists and their work can be found in the magazine as well as authentic stories and messages. Whether dancers, tattoo artists, musicians or painters - they all find a place in Stuck Magazine.


The first issue is to be published as early as this spring and promises to 'uncover new methods of survival and success' based on the values of community and artistic expression. The print magazine is published in English to reach as many people as possible. The brand new magazine also addresses the doubts, fears and systemic issues of a new generation of artists. "In the media, social grievances are hardly communicated by artists," says editor Marius Thielmann. "Yet art offers an ideal, alternative way to discuss such issues. We also deal with the pandemic and the question of how creatives deal with it."

Until the first issue comes out, Marius and Jacopo are producing content on their website and social media. Some small artist profiles, articles and interviews can already be found there so that those interested can already find out about some of the stories. In addition, Stuck Magazine also integrates augmented reality and QR codes to create an interface between the digital materials and the print magazine. Once photographed, the codes open up additional online material to readers.

To remain independent, Stuck Magazine is completely self-financing. The founders raised the costs for the first issue through their fundraising campaign on startnext.com . The Lithuanian printer KOPA is currently putting the finishing touches on the magazine. From there, it will be sent all over Europe in the spring. If you are interested in supporting Marius and Jacopo further, you can find out about the next issues at stuck-magazine.com or follow Stuck Magazine on Instagram, Facebook or LinkedIn. For those who want to hold a magazine in their hands and smell the ink on the paper and for those who want to experience art and subculture more, Stuck Magazine is the right choice.

11th Conference of the Working Group Optics and Optronics of DWT e.V. 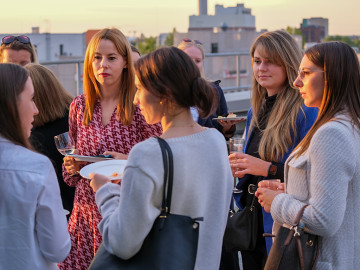