When graduates are about to leave university with their degrees after two, three or four years, it is an ambivalent moment of joy and farewell for all participants. Therefore, families, friends, professors and university staff drank a toast to all graduates to their examination success, congratulated and told astonishing and happy incidents from every day university life, stories about learning stress, hard exams and various happy moments in Berlin. At the same time, graduation ceremonies are the events to see each other for the last time, often for many years. Nevertheless, the euphoric mood prevails. Once you have earned your degree, it is easier to look forward to a job, even if it is still unclear what the future will bring.

The rector of bbw University, Prof. Dr.-Ing. Gebhard Hafer, gave an interesting comparison in his laudation. He simultaneously described the development of a young person until his or her university degree and the development of a building project using the example of Maritim Hotel. With emotional words Prof. Hafer draw a realistic picture of parents and teachers that act like architects developing visions of a building project. He spoke about the different stages of development, the stable foundation that is especially built by schools and parents and about the shell construction and roofing ceremony that symbolise the school leaving examination or vocational training and eventually the interior construction with many important functional and nice details, symbolising the course of studies. He also made clear that even after an inauguration ceremony of a building, work is not complete yet. "As of today, you have highly up-to-date knowledge and practical skills for starting your career, but if you do not continuously increase your knowledge, you will be excluded from competition just like a hotel that is not regularly redecorated and renewed." Therefore, he encouraged the graduates to learn more professional skills, to always improve themselves, and again congratulated all Bachelor graduates that decided to continue a Master course. "I am very glad that so many students decided to stay at our university", said Prof. Hafer.

The laudation of Ulf Schneider, Managing Partner of Schneider Group, was a special one. Born in Hamburg, he is not only founder of a consulting company specialised on German companies in the Russian-speaking area with currently 400 employees in Moscow, he also represents himself as an entrepreneur with attitude. He used this special occasion to talk about memorable stations in his life - about Russian friends that advised him when he had the idea of founding a company, that he first needs a cleaner and a security person since no one would do business with him without that, or about the Ukrainian crisis that split his team and that made friends to people that no longer understand each other. He also talked about a train conductor, who gave him Ukrainian vodka between Moscow and Kiev, and who said that being a railway woman means to travel for peace. There always were unpredictable events and spontaneous encounters that changed life importantly, said Ulf Schneider: "Of course planning is always important, but you have to take every coincidence and take time to recognize every chance in life."

So, the idea emerged to start a bicycle tour for peace in the border triangle with colleagues. This tour located on the Ukrainian and Russian border has not only changed the situation within the team since there were always opportunities to talk to border soldiers about the idea of the tour. For that, they met with so much approval and even media attention. Finally, the opinion arose to engage economically as well as in service to society. "This is especially important in times of protectionism with wars and increasing insecurities." He also supports the initiative of a joint economic area between Lisbon and Vladivostok. Ulf Schneider concluded his moving speech with a plea to the graduates: "You are young, please engage for a closer cooperation of all European countries... There is a great chance in economy to get closer together. This is your task." Referring to the relationship between Germany and Russia, he added: "We need people in all levels of society who try to cut through the Gordian knot. There is only one way to do so: It leads through the admission that both sides made mistakes. We have to talk with each other... and work together. Don't get discouraged. May you develop lots of economic initiatives for the understanding of people. Please keep your visions. I am glad that bbw University of Applied Sciences already closely collaborates with the Higher School of Economics (HSE) in Moscow and with the St. Petersburg Academic University, and I am looking forward to joint projects in the future."

Afterwards, the graduates entered the stage, received their certificates and were photographed under the applause of all guests. Daniel Kuhk received a special thank-you from the director of studies, Prof. Dr. Angelika Grunewald, for his intensive work throughout the years as the chair of the student parliament. Together with the rector, they honoured this year's top graduates. Shortly before concluding, Jule Strothmann and Linda Renneisen entered the stage to traditionally hold a speech for all Bachelor and Master Graduates. They thanked their families, fellow students, professors and university staff who supported them during their time at university. Linda Renneisen said: "Today we are proud for what we have achieved. Our success as students speaks for the university and for the study programme. For me, it was the best decision to study in the Master programme Real Estate Project Management." Also Jule Strothmann bowed out with very personal words: "Dear university team, you are the heart of university... You were always there for us. We were all taken serious. Therefore, we are so grateful."

And of course, after the official part of the ceremony, the traditional throwing of the hats was photographed in front of the hotel. 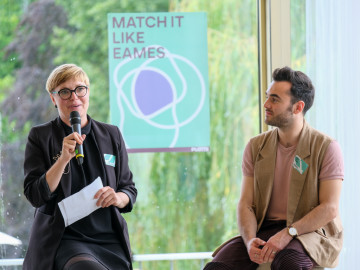 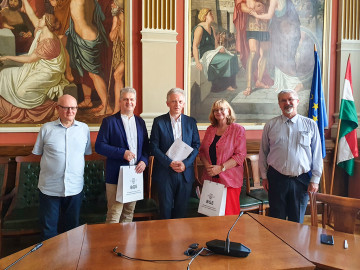 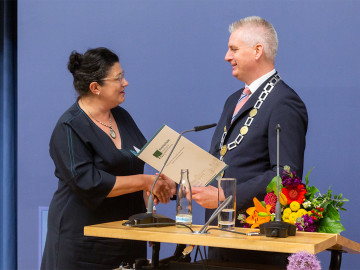 Appointment of Dr. Irina Slot as Professor of Business Management and Engineering