Guest at the German Employers' Day 2019

Events such as the German Employers' Day with speeches and lectures, but also many discussions on the sidelines with important representatives from politics, business and science, are a good seismograph for the further development of the economy, the educational landscape and the adaptability of the universities' own strategies. Having a close eye on these at all times is indispensable for a university of applied sciences in every phase of the economy, but it is particularly important now that the "economic wise men have recently lowered their forecast for the growth of the German economy and new challenges for companies and future specialists and managers are being discussed on a daily basis", said Prof. Hafer. He was particularly positive about the call by BDA head Ingo Kramer, President of the Confederation of German Employers' Associations (BDA), for the Federal Government to invest in an education offensive. Another positive aspect was the tax incentives for research and development which the German Bundestag had already decided on last week. In addition, the awarding of research contracts eligible for funding from 1 January 2020 could also benefit small and medium-sized companies in particular, which do not have their own research capacities. For example, the bbw Hochschule - University of Applied Sciences hopes that the students at the university's own fib research institute will be able to provide even more extensive support to companies in implementing their operational research tasks. 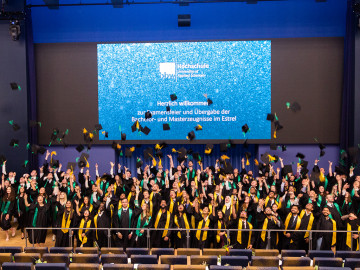